Hilaroo is the brainchild of two-time Oscar winner Hilary Swank, whose soul was so tenderly touched by a little dog with a big heart named Karoo.

Hilary was on the set of a film in South Africa and says, “I don’t know if I found this dog, or the dog found me.” She was doing a scene where she had to hop over a fence and says that on the second take she hopped over the fence and there was a little, tiny butterball looking at her. She picked the dog and the on set photographer captured the exact moment when Hilary and Karoo first met.

Hilary took the stray pup to the vet and learned she wasn’t a “butterball” from food, but rather she was full of worms. She was also covered in fleas and had been doused in kerosene in an attempt to kill them, and had ears infested with a dozen ticks. Hilary had the dog nursed back to health and the time from when the dog had her shots until she was able to travel was exactly the number of days left on the film Hilary was shooting. When Hilary was ready to leave South Africa, so was Karoo, and Hilary didn’t give a second thought to taking her home. 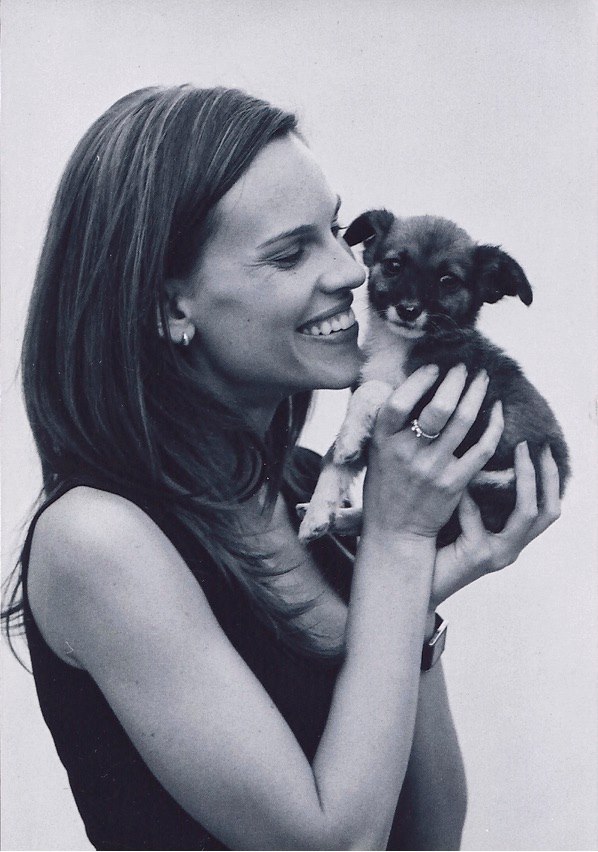 “She literally became the love of my life,” she says, “I can’t explain it, it’s just what a dog does. A dog gets into those places and loves you in a way that’s healing. Dogs also teach you a lot about curiosity, jubilance, how to be in the moment and to trust your instincts. This dog made me think bigger and live in more joy.”

Unfortunately, Karoo died prematurely, just before her 8th birthday. Hilary says that was the true catalyst for Hilaroo. She says when Karoo passed she knew she had to somehow turn her sadness into a positive and do something to honor Karoo’s legacy. She thought if a dog could touch her in such a way, dogs could help others in similar ways. Hilaroo is the bridge to form those connections, and so much more.

The dog just saw me and loved me and touched a place in my heart where no human had ever touched it. So I thought, ‘Wow, there’s a real place for this. If this is how I felt, I can’t imagine how this could really change the path of a soul for the better.” Hilary says, “I adhere by that great quote, ‘I hope that I become the human that my dog thinks that I am.’ I don’t know who rescued who.”